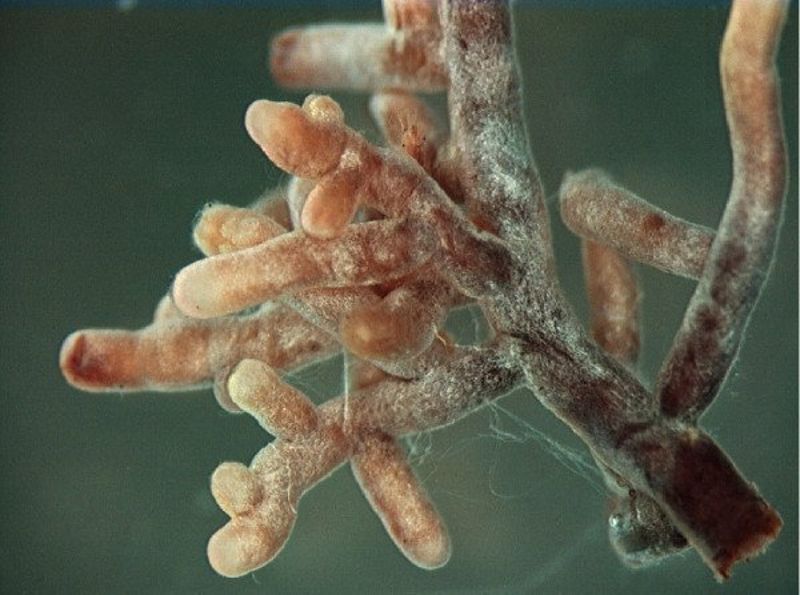 Mycorrhizae form a mutualistic relationship with the roots of most plant species (and while only a small proportion of all species has been examined, 95% of these plant families are predominantly mycorrhizal).

This mutualistic association provides the fungus with relatively constant and direct access to carbohydrates, such as glucose and sucrose supplied by the plant.The carbohydrates are translocated from their source (usually leaves) to root tissue and on to fungal partners. In return, the plant gains the benefits of the mycelium’s higher absorbtive capacity for water and mineral nutrients (due to comparatively large surface area of mycelium:root ratio), thus improving the plant’s mineral absorption capabilities.
Plant roots alone may be incapable of taking up phosphate ions that are demineralized, for example, in soils with a basic pH. The mycelium of the mycorrhizal fungus can, however, access these phosphorus sources, and make them available to the plants they colonize.

The mechanisms of increased absorption are both physical and chemical. Mycorrhizal mycelia are much smaller in diameter than the smallest root, and thus can explore a greater volume of soil, providing a larger surface area for absorption. Also, the cell membrane chemistry of fungi is different from that of plants (including organic acid excretion which aids in ion displacemen). Mycorrhizae are especially beneficial for the plant partner in nutrient-poor soils.

Plants grown in sterile soils and growth media often perform poorly without the addition of spores or hyphae of mycorrhizal fungi to colonise the plant roots and aid in the uptake of soil mineral nutrients.[14] The absence of mycorrhizal fungi can also slow plant growth in early succession or on degraded landscapes.